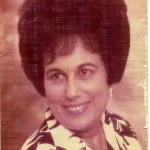 Norma Mary Emmite, 94, departed from this life on May 9th, 2014 at Baywind Village Care Center in League City, Texas. She was a Wife, Mother, Grandmother, Great Grandmother, devoted homemaker and community volunteer.

Mrs. Emmite was born on March 5th, 1920 in Galveston, Texas to Antonio and Cesira Micheletti. She was a resident of Galveston, Texas and graduated from The Ursuline Academy in 1938. She married Frank J. Emmite on April 25, 1942. After the end of WWII, she and her husband made Dickinson, Texas their home and raised four children. In Dickinson, Mrs. Emmite attended Shrine of True Cross Catholic Church and was a member of The Catholic Daughters. In the 1940s and 1950s, Mrs. Emmite helped organize the yearly St. Joseph Altar honoring St. Joseph, the patron saint of the home, which consisted of many baked goods and was a local Italian Catholic tradition at the time.

As a community volunteer, Mrs. Emmite was a member of the Ladies Auxiliary of the Dickinson Volunteer Fire Department for over 20 years beginning in the 1950s where she was very active in fund raising events and social functions. She was also a member of the VFW Ladies Auxiliary. In 1976, she was certified by the Galveston County Health District and worked in the Food Service Division of Dickinson High School for many years. Later, she worked as an organizer and food service director for Shrine of True Cross Catholic School in Dickinson. She loved music and will always be remembered for her love of dancing, sense of humor and perseverance.

Special thanks to Faith Community Hospice and everyone at Baywind Village Care Center in League City, Texas for their kindness and loving care.