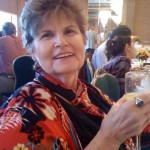 Lois married Malcom Dale Jennings in 1954, she was a member of the Elks Auxiliary, a Ball High graduate; she sold Avon for over 37 years and worked at American National for 9 years.

She is preceded in death by her parents, husband Malcom Jennings and brother, Albert Revels.

Visitation will be Saturday, December 7, 2013 from 5:00pm – 8:00pm at the James Crowder Funeral Home in La Marque. Services will be at the funeral home Sunday, December 8, 2013 at 2:00pm. Burial will follow at Galveston Memorial Park in Hitchcock, Texas.