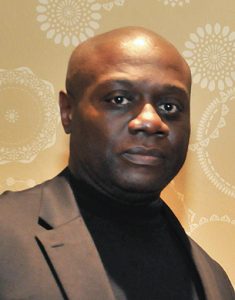 In Jersey City, New Jersey at the Margaret Hague Hospital on June 17, 1961, a son, James (Jim/Naazir) L. Conyers Jr. was born with joyful surprise to Mr. James L. Conyers Sr. and Mrs. Agnes Conyers. Raised in the Jersey City public school system, Naazir graduated from Henry Snyder High School in 1979. Following, he earned a Bachelor of Arts in Communication Arts from Ramapo College. In 1983 he joined the oldest and coldest brotherhood of Alpha Phi Alpha Fraternity Incorporated, Zeta Nu Lambda chapter. While attending Ramapo, Naazir met and fell hopelessly in love with Jacqueline Pierce. They married in East Orange, New Jersey on May 30, 1985. To this union, they were blessed with two sons, James Sekou Conyers III and Fredrick Kamau Conyers. He continued his studies by obtaining a masters in Africana Studies from the University of Albany in 1984, studied Kiswahili, the Swahili language, at Cornell University in 1991, and completed his Doctor of Philosophy (Ph.D.) in African American Studies at Temple University in Philadelphia in 1992. He spent time at Columbia University within the Oral History Institute in the summer of 1995. Jim worked as a graduate faculty fellow which subsequently became a full professor of Black Studies and courtesy professor of history at the University of Nebraska at Omaha. In 2002, he moved to Houston, Texas, where his family now resides, as he became the director of the African American Studies Program and full professor of African American Studies at the University of Houston. Alongside teaching, Dr. Conyers had a heart for research which is reflected in the over 40 books he wrote and/or collaborated on.  Additionally, he worked in Archival and Oral History Research with the University of Ghana, the University of Science & Technology, and the University of Cape Coast from 2003-2006. Throughout his career, Jim was passionate about creating opportunities for others. Among these, the study abroad program in conjunction with the University of Ghana stands out as a significant passion project in his life. For many students, the summers they spent in Ghana became a pivotal experience in their educational journey. Watching his students grow through this program brought Dr. Conyers insurmountable pride and joy. Jim was a proud member of the National Council of Black Studies and served on the National Board for 22 years. He served on the Board of Trustees from 2000-2007 for the Irving Louis Horowitz Foundation Social Policy with Rutgers University and Transactions Publications. He was a part of the Association of Black Sociologists for 19 years, and the Association for the Study of Afro-American Life and History for 33 years. Dr. Conyers was the recipient of numerous accolades and awards over the course of his academic career. Jim was committed to his community and his faith as a loyal member of Wheeler Avenue Baptist Church. As an accomplished author, philanthropist, scholar, impactful mentor, activist, father, and friend, he leaves an immeasurable legacy that has laid a foundation for generations to come. James (Jim/Naazir) L. Conyers Jr. transitioned to the realm of the ancestors on Monday, January 25, 2021. He is preceded in death by his parents, James L. Conyers Sr. and Agnes Conyers, his sister, Gwen Woods, his grandson Hendrix L. Conyers, and the endeared love of his life and mother of his sons, Jacqueline I. Conyers. He leaves behind to cherish his memories sons, James Sekou Conyers III (wife, Salomé B. Conyers), Fredrick K. Conyers, his grandson, James Kareem Conyers IV, his nephew Chad Hawkins, his goddaughter, Ayanna Jamison, endeared extended family, friends, and colleagues. There will be a visitation at 11 a.m. on February 1st, 2021 at Crowder Funeral Home 2422 E. Broadway St., Pearland, TX 77581, with a Funeral Service to follow at 12 noon. The Conyers family would like to thank all who have expressed their sympathy during this time. We greatly appreciate your love, prayers, and abundant thoughtfulness. In lieu of customary remembrances, memorial contributions may be directed toward the William Alexander Lawson Social Justice Scholarship Endowment. Asé!