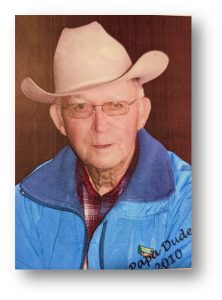 Herschel Guillot, also known as Dude, passed away at the age of 91 years on February 18, 2022 in Galveston, TX. Herschel was born March 24, 1930 to Paul Emeric Guillot and Vallie Eva Reed Guillot in Vick, LA. He was the fourth of seven children. He married Myra Couvillion on March 25, 1948 and together they raised four children.

Herschel attended school and graduated from LaFargue High School, Effie, La. in 1947.  He and Myra, later moved to Pasadena, TX. where he worked 30 years at A.O.Smith/Armco Steel, retiring in 1980. He was co-owner with his wife Myra of a Pasadena restaurant, The Cajun Corral, in the 1970’s. After retirement Dude and Mike moved back to Louisiana.  He attended LSU Shreveport and became a real estate agent in 1982.

Herschel is a long time member of Pasadena, First Church of the Nazarene, Pasadena, Texas.

Herschel enjoyed wood working where he created many items in his wood shop. After many years in Coushatta, LA, they moved back to the greater Houston area to be closer to their children, eventually retiring in Galveston, TX. He volunteered many years as greeter and all-around encourager at Clear Lake Christian Academy, where all the students knew him lovingly as “Pops.”

The family would like to thank the staff of The Meridian Retirement Community in Galveston, TX.  Their care, thoughtfulness and tireless effort meant so much to them during this hard time of transition.  They truly exemplified Christian charity in their actions and hearts.

Herschel Guillot was one of the most giving people to have walked God’s good earth.  In lieu of flowers please feel free to make a donation to your favorite charity.