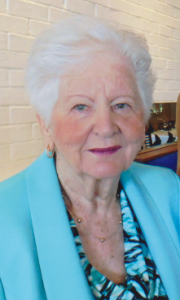 Gina Cutropia was born in Cavasso Nuovo, Italy on August 8, 1928. She died peacefully on Saturday, May 18, 2019 at the age of 90. Gina was the daughter of John & Cesira Zambon and immigrated to Houston at the age of eight with her parents and cherished younger sister Edda. Gina graduated from Stephen F. Austin High School in 1946 and upon graduation went to work in the administrative offices of the City of Houston. She married Louis Cutropia in 1954 and later started a family when her daughter Anna was born. She was a loving wife, mother, grandmother, sister, aunt and friend and was known for her engaging personality, sense of humor and quick wit. Her passions included spending time with family, reading, playing cards and dominoes, especially Mexican Train, and Rummy Cube with her family card group. Holidays and family dinners and gatherings were some of her happiest times. Gina was predeceased by her loving husband, Louis, in 2007 and her sister and brother-in-law, Edda and Mike Maraldo. She is survived by her family including her beloved daughter and son-in-law, Anna and Scott Haire and children, Shari Oldfield and husband David, Justin and wife Lauren, Ryan and wife Tara, and Derek and wife Victoria, nephew Michael Maraldo and sons Christopher, Jonathan and Brandon, and niece Debbie Bonno and husband Frank and their children Christina Whitehurst and husband Preston, Claire Bonno and Frank Bonno. She is also survived by great-grandchildren Avery and Brady Oldfield; Peyton, Preston and Parker Haire; and Kya, Bryce, and Vivian Haire and great-great nephew Michael Whitehurst. She will be missed by many special cousins, friends and neighbors. A visitation will be held at Crowder Funeral Home, 111 E. Medical Center Blvd. Webster, Texas from 5:00 -7:00 p.m. on Wednesday, May 22, 2019 with a Rosary following at 7:00 p.m. A mass celebrating Gina’s life will be held on Thursday, May 23, 2019 at 10:30 a.m. at Saint Bernadette Catholic Church, 15500 El Camino Real, Houston 77062. Interment will follow at Forest Park Lawndale, Houston, Texas.