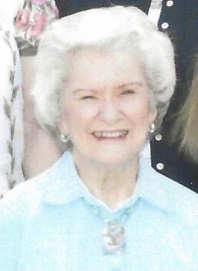 Elizabeth and Dub lived in many states throughout the years in his business of chemical plant construction, which led them to develop friendships in states from Wyoming to Texas to South Carolina. Elizabeth was involved in children’s and youth ministries in several Baptist churches throughout her life with her last assignment beginning at age 90 as a Sunday School teacher for two-year-olds.

Elizabeth graduated as Valedictorian from Agua Dulce High School and was a member of the Pathways/Ventures class at Nassau Bay Baptist Church (NBBC) and Sonshiners 55+. She had the distinction of being recognized as the oldest mom at NBBC for many Mother’s Days during her 26-year church membership.

Visitation at 9 am and 10 am funeral service will be held at Nassau Bay Baptist Church at 18131 Nassau Bay Dr. Houston, 77058. Following Elizabeth’s service, graveside and interment next to her beloved Dub will be held at Memorial Oaks Cemetery at 13001 Katy Freeway, Houston, TX 77079.