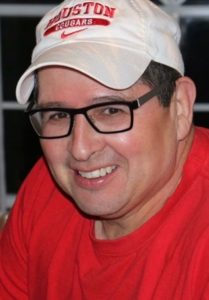 Eduardo D. Cantu passed away suddenly on June 29, 2020.  Ed would always want to be remembered by his wit and humor that he always bestowed on his friends, but most importantly by his greatest accomplishment in life, his son, Matthew Thomas Cantu.

Edward’s life is a rag to riches tale which began on March 8, 1960 in Alice, Texas. His father, Merced, worked on the railroad and was the strongest man Ed knew. He always compared him to John Henry. His mother, Josefa, worked at keeping the family fed and clothed. Edward was brilliant from the start and learned that education was the way out of poverty. He played football for the fighting Alice Coyotes and made it to regionals which he was very proud of. After high school, he worked his way through The Texas A & M—Kingsville system in Finance. After completion of his degree, he worked various temp jobs in Corpus Christi until he landed a job with Celanese. During his time in Corpus, he became a state qualifier in racquetball, and he played every night at the YMCA with his buddies who have become lifelong friends. Those nights at the Y were some of the best times of his life. They would talk and banter and harass each other until the staff made them leave at closing time. The stories those racquetball walls could tell would make everyone laugh.   While working at Celanese, he was transferred to the Bayport plant and became a long-time resident of League City.

The year of the transfer, he also became a father to Matthew Cantu. Once Edward became a father, his life changed forever. He would and has done everything for his son. Matthew is the shining light in his world, and no one is more important than him. He read, I love you Forever By Robert Munsch, a million times to the child who changed his heart and made it swell it bigger than possible. “It is not flesh and blood, but heart which makes us fathers and sons.” – Johann Friedrich Von Schiller. Matthew and Ed lived together until the very end.

Edward’s love of racquetball took a turn in the 2000s when he picked up a tennis racquet. The Fitness Center at South Shore became his new Y, and his friends that he played with, beat, lost to, and were recipients of his “Vamos” will always remember his love of the game and their friendships. Ed last played with one of his favorite partners, Keith Gross, on Sunday. Keith and Kellie became his second family in the area as well as Dr. Edward Cortez, and he was so appreciative of their friendship as he was with all his tennis buddies.

Edward loved sports and could talk to you about any sport at any time and could tell you everything about who played and when and who was great and who wasn’t. He was a member of the United States Tennis Association and won many tournaments in the area as well as supported many of the fundraising tournaments in the area like the Clear Creek Education Foundation Tournament. He also travelled extensively to view some of the highest profile tournaments on the circuit like Wimbledon, Roland Garros (French Open), and the US Open. He was always the last one on the plane—even when they had to hold the door for him. So, “Vamos”, friend, until we meet again!

Eduardo is preceded in death by his father and mother, Merced and Josefa Cantu. He is survived by his son, Matthew Thomas Cantu, his oldest sister who was like a mom to him, Elvidia Cantu Flores, sister, Eliza Cantu, and brothers Jesus “Bear” Cantu and Esequiel Cantu. His niece, Annette Masquifelt and her daughter Casey Masquifelt, niece, Tracy Hughes and nephews, Lorenzo Flores Jr., and Michael Garcia.

A visitation will take place on Sunday, July 5 from 1:00-3:00, and a short service will follow at 3:00 by Deacon Andy DeYoung at Crowder Funeral Home, 1645 East Main Street, League City, TX.

Due to the COVID 19 public gathering restrictions, Crowder Funeral Home requires all visitors to wear a mask and maintain a social distance of six feet from attendees. Maximum occupancy is 70 guests. Please maintain a social distance during the visitation, while seated in the chapel.  Your assistance during this difficult time is greatly appreciated. Thank you for your cooperation and understanding.