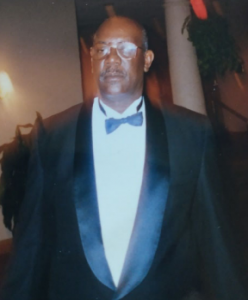 Dr. Johnny Gills, Jr. passed away in his home in Houston, Texas (Clear Lake) on August 11, 2021. He bravely battled multiple myeloma cancer for over 8 years and succumbed to that disease and related underlying conditions.

Dr. Gills was born and raised in New Orleans, Louisiana, though he spent the last 30+ years of his life in his adopted home of Houston. Throughout the years, his work and personal life allowed him to live in multiple other U.S. cities, including Baton Rouge, Louisiana; Washington, D.C.; Chicago, Illinois, and Allentown, Pennsylvania. He leaves behind a legacy of education and innovation, as well as family and friends around the globe.

He attended St. Augustine High School in New Orleans as part of the Class of 1964 and was a “big man” on campus, playing football and other sports. A teacher there took a personal interest in him—recognizing his analytical and sharp mind—and encouraged him to pursue a career in math. He followed that passion, attending Louisiana State University (LSU) as part of the Class of 1969, and he ultimately obtained all of his degrees in math (B.S., M.S., and Ph.D.) from that university. While there, he joined and was a proud member of the Pi Mu Epsilon National Honorary Math Fraternity. Dr. Gills was one of the first Black students to achieve all three degrees in math from LSU. His Ph.D. thesis was entitled “Totally Factorable Operators” (1977). See https://digitalcommons.lsu.edu/gradschool_disstheses/3065 Even today, the number of Black mathematicians remains relatively small.

Dr. Gills was an educator at heart. He taught math at multiple universities, including Southern University, Howard University, George Mason College, University of the District of Columbia, and Jackson State University. He was passionate about encouraging Black students to pursue careers in STEM, including his two daughters who obtained degrees in physics and electrical engineering. His strong math background also paved the way for his later roles outside of academia, including as a reliability engineer at AT&T Bell Laboratories and AT&T Communications and similar roles with Loral Aerospace and NASA Johnson Space Center.

During his tenure in Allentown in the 1980s, he became the first Black person to win public office by serving on the Allentown Public School Board. In achieving this historic feat, he remarked on his two-pronged campaign: “I knocked on a lot of doors and I focused on people who were likely to vote for me because of my credentials rather than vote against me because of my color.” While in that role, he served as Chair of the Education Committee. Even then, he was a strong advocate for using computers in schools. In addition to serving on the Board, Dr. Gills also served on the district’s Athletic Council and was a regular tutor of middle school students.

After retiring from NASA, he pursued full-time his own business as “The Computer Doctor,” where he helped small businesses and individuals set up their home computer and networking systems, and also provided other tech or website support. In addition, he spent a short stint in Houston’s charter school network teaching math to 8th and 9th grade students. He prided himself in pushing those around him to always pursue academic and professional excellence.

Dr. Gills’ passion for teaching extended to spreading his love of cooking and playing bridge with others. Even as a novice bridge player, Dr. Gills would still teach others how to play and excel at the game. He was an asset and friend to his local Clear Lake Bridge Club where he served as an occasional Game Director and regularly helped with the Club’s technology. He was also a well-known and accomplished member of both the American Contract Bridge League and the American Bridge Association. At these bridge events, he was known for wearing his baseball caps from around the world—souvenirs from his youngest daughter’s many trips.

He was famous for his seafood and chicken gumbos and spicy infused pork loin, and would share his beloved dishes with family and friends at Thanksgiving and other events. He also had some hidden talents, including photography and a green thumb. As a young man, he supplemented his income as a freelance photographer taking photos at weddings, graduations, and other special events. Later in life, he also set up many personal websites for family and friends to share pictures and videos, and also helped maintain websites for his various bridge groups. He also shared his love of African-American art with others, by selling framed prints.

A private virtual memorial service will be held on September 5, 2021.