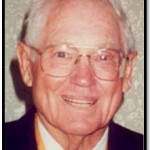 Dr. Floyd D. Boze, was delivered at home in Ector, Texas on Febraury 7, 1918. He died at his home in League City, Texas on February 20, 2014 at the age of 96. He grew up in Commerce, TX. Dr. Boze had B.S. and M.S. degrees from East Texas State University and a Doctorate in Administration from the University of Tennessee Knoxville. He received his commission in the US Air Force at Yale University during WW II and retired as a full Colonel. He held administrative positions at Panola College, Angelo State University, the University of Tennessee, Texas Tech University, and the University of Houston Clear Lake. He was a member of the Space Center Rotary Club and had not missed a meeting in over 50 years. Floyd was preceded in death by his wife, Nancy and nine siblings. He will be missed by his son, William Franklin Boze II, and daughter, Ann Beatty, and 3 grandchildren. Visitation will be from 6-8 pm Wed. Feb. 26 at Crowder Funeral Home in League City. Funeral Service will be at 10 am Thurs. at Gloria Dei Lutheran Church, Nassau Bay. Interment will be in Forest Park East Cemetery. In lieu of flowers, donations may be made to the Space Center Rotary Foundation, PO Box 58862, Houston TX 77258-8862.