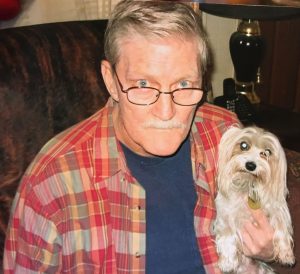 On January 12, 2022, Donald Lee Christiansen (75) left this world to be with his Lord and Savior. Born in Omaha, Nebraska on March 20, 1946, Donald was one of seven children born to Carl Christiansen of Düsseldorf, Germany and Leola Michelson of Omaha, Nebraska. He was raised in Louisville, NE. He had three sisters – Carolyn Baier, Dorothy Loftus, and Theresa Kaffenberger and three brothers – Roland, Richard and Stanley Christiansen. As a teen he was larger than life and loved to race cars, hanging out, hunting and playing jokes on his brothers and his friends. In high school he met Karen Scott whom he wed in Louisville, Nebraska at the Methodist Church in 1966. They lived in the area for fifteen years and had three children. Dona Christiansen Wingard, Kelli Christiansen Graham, and Toby Christiansen, all currently residing in League City, TX. He was extremely proud of his children’s accomplishments and the lives they have built for themselves. He worked as an Industrial Construction Superintendent until he retired in 2003. Some of the projects that he was particularly proud of working on were The Henry Dorley Zoo in Omaha, Nebraska and the Houston Ship Channel Bridge. If you had a problem or something broke, he was your man. He could fix anything. If you called him, he would come running. In 1982, they moved their family to Texas where they have stayed and their family grew to include four grandchildren whom he loved with all his heart, Hannah and Jacob Wingard and Alexis and Alyssa Christiansen. He enjoyed his grandchildren immensely, their sporting events, all the things they loved to do and most importantly, he loved being their Papa! In 1991, he and Karen went their separate ways and divorced. In 1996, he married Dorothy Ann Posey from Birmingham, Alabama. They resided in Houston and then moved to Pasadena, Texas. They lived next door to his beloved sister and best friend, Carolyn Baier, and her husband Jesse. He was widowed in 2010. He and Carolyn loved to go to estate sales and spend time together. He loved to collect things from these sales and enjoyed buying odd and interesting things to gift to his children. He is preceded in death by his parents, Carl and Leola Christiansen; sisters, Carolyn Baier and Theresa Kaffenberger; brothers, Roland (Pinky) and Stanley (George) Christiansen; father-in-law, Howard Eugene (John) Scott; grandson, Thomas Lee Wingard; and wife, Dorothy Ann Posey; as well as many of his friends that he loved and laughed with often. He was a simple man with simple needs and didn’t care for extravagance. He spoiled his puppies – Max, Bud and Pixie. He adored babies and children. He loved his family and friends generously and talked about them often. He will be missed dearly. We love the thought of him walking through the pearly gates without pain and being embraced by all those that he has been missing. He is once again racing, hunting, laughing and larger than life! At his request, there will be no formal service. In lieu of flowers, please donate in his name to the League City Animal Shelter, 755 W Walker St, League City, TX. 77573.