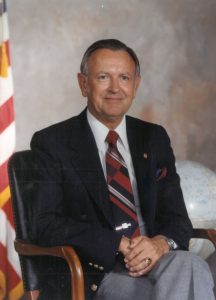 Beginning his career as an aeronautical engineer, Chris rose to become one of the world’s most highly recognized and decorated aerospace executives. He achieved this because of his commitment and dedication to the mission, his relationship with people at all levels (from Presidents and Royalty to interns) and his leadership. Chris also used these same characteristics to contribute to the success of other industries such as medical and energy.

Chris is survived by his wife of 68 years, Betty Anne; his son Gordon Turnbull Kraft (Robin) and their son, Christopher R. Kraft; his daughter Kristi-Anne DuPont (Glenn) and their sons Colin and Steven DuPont; six great grandchildren and one great grandson.

Chris attended Immanuel Episcopal Church in Phoebus, Virginia, where he and Betty Anne were married in 1950. Chris was a member of St. Thomas the Apostle Episcopal Church in Nassau Bay, Texas, where a private family service well be held, officiated by the Rev. Mike Stone and the Rev. Jenny Scott.