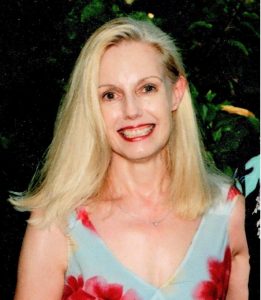 Catherine Agnes Fraser Brock, 70, passed away on October 20, 2020, in Houston, Texas. She was born on October 28, 1949, in Oklahoma City, Oklahoma, to Richard Hobbs and Vivian Brumfield Fraser and grew up in Cookeville, Tennessee. She attended the University of Tennessee at Knoxville, where she met her husband of 50 years, Michael (Mickey) Brock, on a blind date. After marrying, moving to Texas, and becoming a mother, she completed her bachelor’s and master’s degrees in psychology at the University of Houston at Clear Lake. In 1981, she moved with her family to Wilmington, Delaware, where she was an active member of Christ Church Christiana Hundred, serving as Green Show Chair, President of the Women of the Church, and Altar Guild member. Upon moving back to Houston in 1995, she and her husband joined The Church of St. John the Divine, where Cathy continued her Altar Guild work and she and Mickey enjoyed being active participants in numerous fellowship and study groups. Cathy was a kind and generous wife, mother, daughter, and friend, who loved giving gifts. She had a passion for learning and read voraciously, usually with a cup of black coffee by her side. She loved photography and spent countless hours editing pictures of family and friends on her computer. She also enjoyed traveling, museums, plays, genealogy, shopping trips with her daughter, and spending time with the family dogs. Together, Cathy and Mickey were avid rock concert enthusiasts and were lucky enough to see most of their favorite bands from the late sixties multiple times. Although her passions were interrupted by a significant illness that began in 2008, Cathy was a courageous fighter to the end. She is survived by her husband, Michael Brock of Houston, her daughter, Melissa Brock of Nashville, her loving caregivers, her numerous in-laws and cousins in her extended Brock, Fraser, and Brumfield families, and her many friends. A private memorial service will be held on Saturday, October 24, 2020, at 11:00 am at The Church of St. John the Divine in Houston, Texas, followed by a graveside service at the Cookeville City Cemetery in Cookeville, Tennessee, on Monday, October 26, 2020, at 2:00 pm. In lieu of flowers, those wishing to make a memorial donation in Cathy’s name may do so to the Brain Aneurysm Foundation at bafound.org.