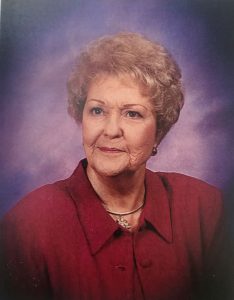 Betty Sorrow Cawley, 87, of Pearland, Texas went to her heavenly home on May 15, 2019, surrounded by loving family and friends. She is preceded in death by her husband of 66 years, Edward “Ed” Cawley, parents Bose and Nancy Kate Sorrow and sisters Nellie Roberta Mapp, Laura Belle Sorrow, Doris Harkins, Dorothy Battle, and Nancy Myrick.
Left to cherish her memory are son, Eddie Cawley and wife Linda; daughter, Judy Vinson and husband Curtis; son, Alan Cawley and wife Jane; grandchildren: Holly, Randy and Alan Dean, Caitlyn Wanex and husband Josh, Tara, Ryanne and Jenna Cawley; great grandson, Kailer Wanex; sister, Shirley Prescott and a host of other family members and friends.
Betty was born on April 20, 1932 in Sarasota, Florida and spent her early years in Augusta, Georgia. She and Ed married on May 20, 1951 and both worked to help earn Ed’s engineering degree at Georgia Tech. Ed’s employment with NASA brought them to Houston in 1963.
Betty was a devoted full-time wife and mother while her children were young and served as Room Mother, Team Mother, Den Mother and Brownie troop leader. She was, of course, always the prettiest mom!
When her children were teenagers, she went back to school, earned her real estate sales license, and joined her friends at Pat Griffin Realty. She went on to obtain her broker’s license and enjoyed a successful career for many years.
Betty and Ed moved to Pearland in 1981 and as longtime members of Golfcrest country club, they enjoyed countless hours on the golf course. Betty even earned the distinction of shooting two hole-in-ones!
She was also an accomplished bridge player and thoroughly enjoyed playing with her group as well as teaching others the game. Betty enjoyed many club activities while developing numerous cherished friendships along the way. She had a standing Friday night date at the club for dinner with a treasured group of friends and always looked forward to it.
Above all, Betty had the heart of a servant and was always doing for others while putting herself last. It was hard to make her sit down! She cared lovingly and meticulously for Ed during his declining years, leaving no need unattended.
Betty will be dearly missed by all who knew and loved her.
The family would like to thank Betty’s friend and caregiver Bonnie Burden for her loving care and attention during her final days.
Her Memorial service will be Friday, May 24th at 2:00 p.m. at First United Methodist Church Pearland with a reception following at Golfcrest Country Club.
In lieu of flowers, the family requests donations be considered to First United Methodist Church Pearland, where Betty was a longtime member.