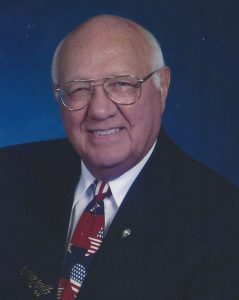 Alfred (Al) Joseph Ligrani passed away on 15 March 2020 at the age of 92 from complications after a fall. A longtime resident of the Clear Lake Area and NASA employee, Al always loved and supported the people in his life, his church, and his community. He was a beloved family man, husband, father, and friend. He will be missed and always remembered.

Al was born in Denver, Colorado on 21 August 1927 to Fred and Della Ligrani. He was raised in Denver with his three sisters: Mary, Helen, and Viola. He attended North Denver High School and soon after graduation, he enlisted in the US Army to serve during World War II. He was in the Army Tank Corp. until the war ended. After the Army, Al enrolled in Colorado State College in Greeley, Colorado where he earned his first degree in Education. Al later earned a master’s degree in Educational Administration from William and Mary University in Williamsburg, Virginia. While at Colorado State, Al met Marilyn Waugh who became his wife in 1948 and mother to their two sons, Kenneth and Phillip. Al and family traveled where his jobs took him including Wyoming, Virginia, and Texas. After 19 years, Al and Marilyn divorced. Later in life, Al met Blanche Look and in 1993 they married and created a blended family including Blanche’s children, Cheryl Scott and Jeff Look.

Al worked in the US Civil Service for over 45 years. After graduating from Colorado State (1950), he went to work as an instructor at the Air Force Technical School at Warren Air Force Base in Cheyenne, Wyoming. In 1958, Al took another instructor position at Fort Eustis, Virginia. While working in Virginia, he completed his master’s degree. In 1962, Al joined NASA in Langley, Virginia, and the family relocated from Virginia to Houston, Texas. Al remained with NASA at Johnson Space Center until retirement in 1995. During his tenure at NASA, he served in various divisions and positions. Early on, Al was in the Flight Support Division supporting Gemini space flights. Towards the end, he worked on budgets and planning for future space endeavors, both manned and unmanned, including travel to Mars. He thoroughly enjoyed his career at NASA.

Al was always engaged in community and civic activities. From 1968 to 1970, Al served as mayor of El Lago, Texas, the community in which his family initially settled. He was a member of Space Center Rotary and served as President from 1979-1980. He was active in other organizations including the Sunshine Club, Meals on Wheels, Samaritan Counseling Center, National Association of Retired Federal Workers, Interfaith Ministries, and others.

Al was always interested in sports. He played football in high school and college. He enjoyed tennis, softball, and sports officiating (basketball primarily) in his younger days. He also enjoyed coaching little league baseball where his son Ken was a player. He later took up golf which he played for many years.

A memorial service for Al Ligrani will be held at a later date, after the Coronavirus crisis subsides. An announcement on time and location will be published. The family requests that in lieu of flowers, donations be made to Clear Lake United Methodist Church, which can be contacted online at “clearlakemethodist.org/give” or by mail at Clear Lake United Methodist Church, 16335 El Camino Real, Houston, TX 77062.