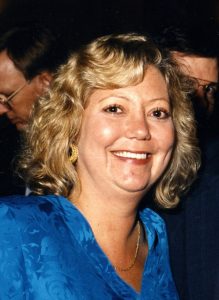 Cindy was born in St. Louis, MO, April 23, 1955. She graduated from Milby High School in Houston, TX and soon started a career at Johnson Space Center where she worked for NASA ten years. She then worked for Rockwell, Grumman, MRI, USA, and Barrios before retiring in 2016. She frequently commented that she worked for numerous contractors but for many years always at the same desk with the same phone number; her contractors changing but not her position.

She will be remembered as a loving daughter and companion to her father who enjoyed doing her “daddy dos” and he will miss her dearly. She was a wonderful Aunt Cindy to Ross, Hannah, and Clara and enjoyed competing with them on game nights while telling stories about her childhood. Cindy also was devoted to children of her friends, several of whom referred to her as Aunt Cindy. She loved sharing vacations with friends and family, especially time with her nephew and nieces. As a devoted sports fan, she enthusiastically supported the Astros, Rockets and the Texans. There was an occasional conflict when the Cardinals were in town or on the air. When she was younger, she spent many weeks and weekends at a family home on Lake Travis where she loved to water ski.

Cindy was an ardent and compassionate cat lover who adopted shelter cats and supported the local animal shelters. She frequently rescued neighborhood stray cats and was sometimes referred to as the cat lady.

She is preceded in death by her mother, Nancy Pyatt Kohrs.

In lieu of flowers, the family encourages donations to local animal shelters.

A visitation will be held at Crowder Funeral Home in Dickinson, TX, Monday, February 25, 5 – 8 pm.